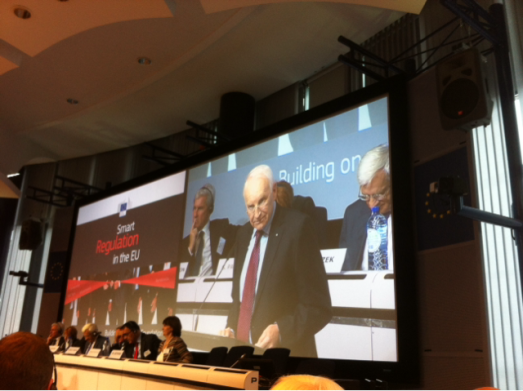 On Tuesday the 14th of Oct. the High Level Group on Administrative Burdens, the so called Stoiber-group, presented its Final Report. The group, which was put in place by the President of the European Commission José Manuel Barroso in 2007 and chaired by the former Prime Minister of Bavaria Dr. Edmund Stoiber, has  during its mandate adopted more than 45 opinions and reports which present to the European Commission several hundred suggestions on how to reduce administrative burdens and outline best practice in the Member States on implementing EU legislation in the least burdensome way.

The Swedish Better Regulation Council attended the event when the Final Report was presented in its role as observers to the Stoiber-group.  The event marked the final meeting of the HLG on administrative burdens.

You can find out more about which cookies we are using or switch them off in settings.

This website uses cookies so that we can provide you with the best user experience possible. Cookie information is stored in your browser and performs functions such as recognising you when you return to our website and helping our team to understand which sections of the website you find most interesting and useful.

Strictly Necessary Cookie should be enabled at all times so that we can save your preferences for cookie settings.

If you disable this cookie, we will not be able to save your preferences. This means that every time you visit this website you will need to enable or disable cookies again.